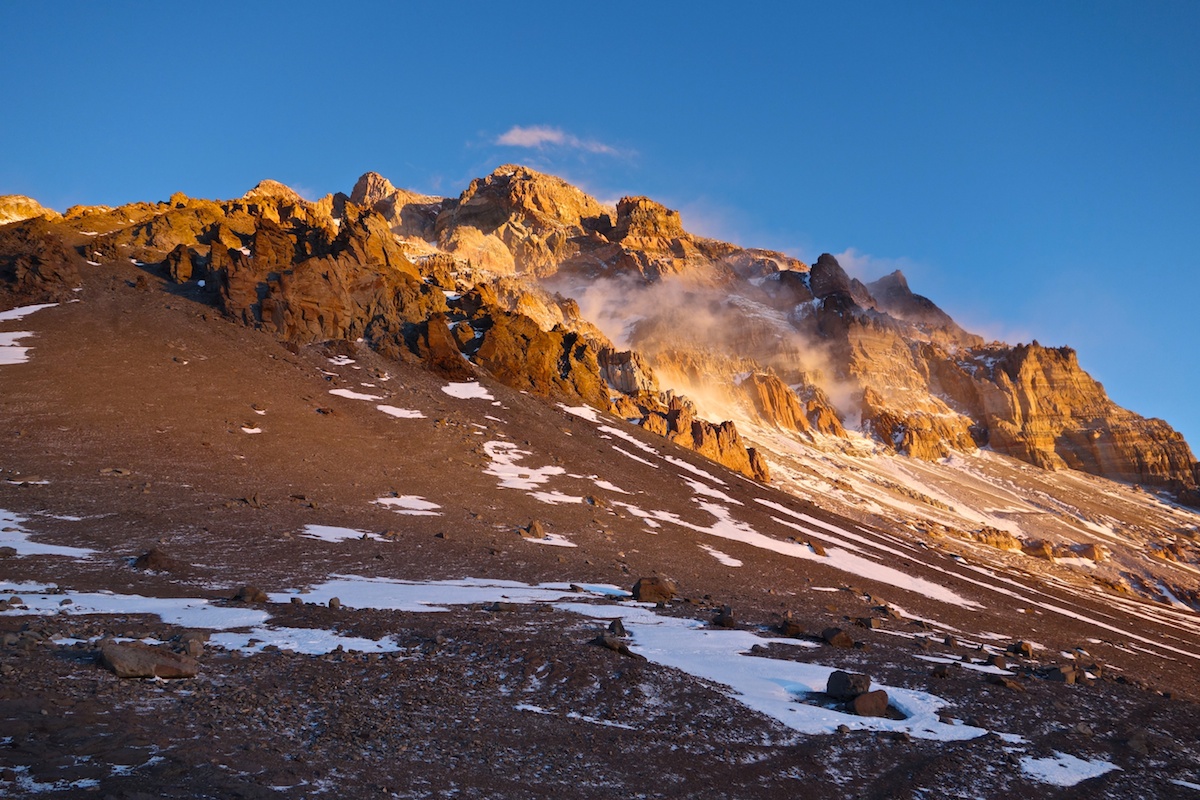 Aconcagua ascent in 17 days is quite simple. It is the longest acclimatization program for Aconcagua you can find, that virtually guarantees you ascent despite the altitude and weather. This program is a great preparational step before the “real” seventhousander. There is no ice on the route, no overnight stays in the snow, no difficult terrain. However, you can fully experience the rarefied air on 7000 meters. The route is quite short compared to most other mountains. Height is typed fast, the descent is quite simple and pleasant.

Expedition to Aconcagua begins in the resort town of Mendoza, which is also called the grape capital of Argentina. This town is situated at an altitude of 800 meters above sea level. On arrival to Mendoza the expedition can sleep and rest. The next day we’ll go up to the closest to the national park hotel Puente del Inca (2700 meters above sea level). The next morning we’ll be taken to the entrance to the National Park Aconcagua from where we’ll start walking part of our expedition.
The first transition to the camp Confluence (3300m) is quite simple and takes only three to four hours (some participants go through this part of the route even for 1.5 hours!). At the Confluence the group stays for two nights required for acclimatization. On the day of rest we’ll climbe to the Plaza France (4100 meters). Then the group goes to the base camp Plaza de Mulas (4450m) which is the beginning of classical ascent route on Aconcagua on the Northwest ridge. The transition will take from 7 to 8 hours.
After the transition we’ll have a rest day in the base camp, gaining strength for the first acclimatization. We will establish several camps – Plaza Canada (5000m altitude), Nido de Kodores ( “Nest of condors”, 5600m) and already in the second way – assault camp in the village of “Berlin” (6000 m). Climbing to the summit of Aconcagua is planned for the 12-14th day depending on the weather and participants well-being.
After the ascent we descend to the base camp and celebrate the success of the expedition. During one quite a long day we will walk the entire track and already in the evening will be in Mendoza with a hot shower and delicious steaks. There are more than a thousand wineries in the city. Alpinists can participate in fine wines tasting and buy the drinks they liked.

Program of guided Aconcagua ascent by the classical route (17 days).

The cost of Aconcagua ascent includes:

The cost of Aconcagua ascent doesn’t include:

About the tour Schedule Services Equipment
We use cookies to ensure that we give you the best experience on our website. If you continue to use this site we will assume that you are happy with it.Ok