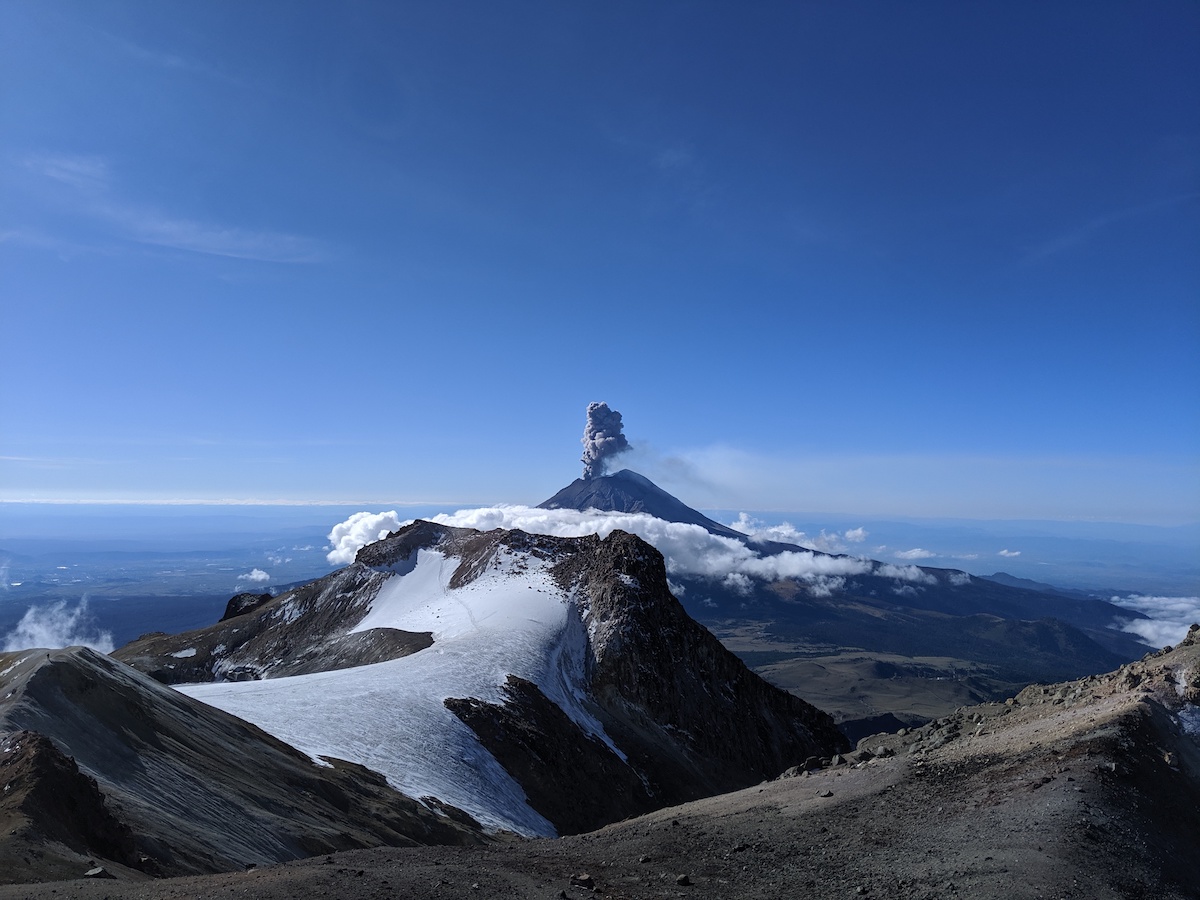 ABOUT THE TRIP
In the heart of Mexico, about 800 miles south of the border with the United States, rise the third and seventh highest mountains in North America. El Pico de Orizaba (also known as Chitlalcotepetl, 5700m) and Iztaccihuatl (also known as Izta, 5230m) rise impressively from the central plateau. This tour provides a great experience for both the advanced beginner and the intermediate climber. It also serves as an excellent preparation for climbing mountains like Denali and is an affordable way to participate in a successful international high altitude expedition.
In 9 days we will try to climb the tops of the ancient peaks, which are 10 million years old (while their current form can be dated to 2.5 million years). For those interested in high-altitude challenges, this climb is a great opportunity to gain the experience and skills needed to succeed in the world’s highest mountains.

THE MOUNTAINS
Iztaccihuatl is covered in snow and ice, which form small glaciers at higher elevations with relatively few cracks. Our ascent will start at 2am to be as high as possible by sunrise and to make sure we have enough time to ascend gradually and safely. Izta is known in Aztec mythology as the “sleeping lady”. When we talk about Izta, we use bodily terms to describe the parts of the mountain: la caballera (hair), la cameza (head), la orega (ear), etc. When approaching the many false peaks, Izta is a difficult climb.

After climbing Iztaccihuatl, we will have a rest day before climbing our second goal, El Pico de Orizaba. Orizaba is the third highest peak in North America. This is a ruined volcano that has retained most of its symmetrical shape. Although the summit is heavily iced, these glaciers have few cracks, allowing the novice climber to develop skills while encountering relatively few dangerous spots. Due to its high altitude, Orizaba offers a wonderful first experience with high altitude and fantastic panoramic views.

THE LEGEND OF POPO AND IZTA
This story is well known in all the regions of Puebla and quite well known throughout Mexico. The legend tells that while Popo (Smoking Warrior) was at war, the beautiful daughter of the emperor, Izta, died of heartache. When he returned and learned of her death, he built two mountains. On one he laid her body, and on the other he stood with a funeral torch. On some days, it still seems like Izta is sprawled out on her back, with a pair of Popo watching her. Given his recent activism, many are reluctant to abandon the romantic imagery of this great “Smoking Mountain.”

Schedule for Volcanoes of Mexico.

Price of Volcanoes of Mexico includes:

Price of Volcanoes of Mexico does not include: