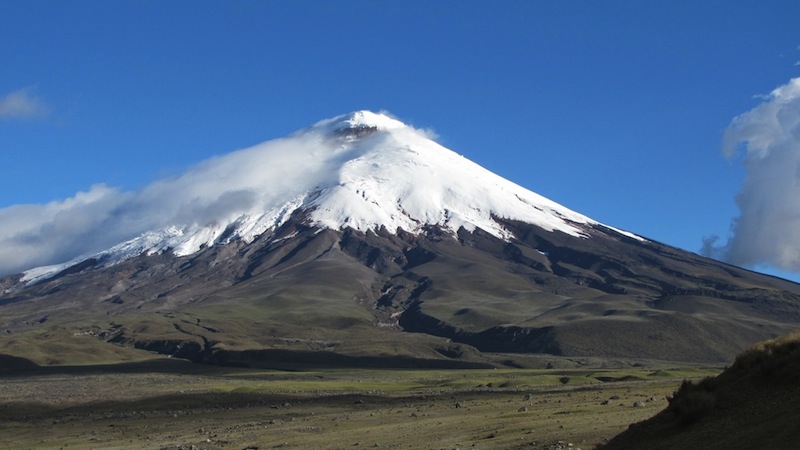 This unique itinerary is designed specially to make it possible to summit within ten days the following three mountains – from the easiest trekking Mt. Pasochoa (4200m) to Chimborazo volcano (6310m), the most beautiful and highest in Ecuador.

Ecuador is located in the equatorial zone of South America. On the north it borders with Columbia, and on the east – with Peru. Ecuador’s western regions are bounded by the Pacific ocean.

Geographically the country is divided into three zones – the low-land coastlines, the central mountainous region with high Andes, and the eastern side (Amazon rainforests). This country, deeply impacted by volcanic activities, counts about 20 active volcanoes on the territory stretching from Mt. Sangay and up to the border with Columbia. The most well-known among those volcanoes are Pichincha (4789m) towering over the city of Quito, Illiniza(5212m), Cotopaxi and giant Chimborazo ( 6310m), the highest peak in Ecuador.

Though some of those volcanoes are very ancient and long extinct (such as Chimborazo), others – particularly Cotopaxi and Sangay – are still full of activity.

Mountains, raising high in the air, fire, breaking free from the earth’s interior, cold on the high altitudes and tropic sun – all those together turned Ecuador into a country with the most glaring diversity of natural environments on the Earth. There are over 20 national parks and ecological reserves in the country.

The capital city of Ecuador is Quito (coordinates: 0 degrees, 0 minutes, 0 seconds – as defined by geographers  24 km away from Quito). The line of equator passes there, at the altitude of 3000m above the sea level. When visiting the monument on the equatorial line, tourists stand with one foot on the Northern and with the other – on the Southern hemisphere.

Quito is the most ancient among Indian cities in South America and also a most beautiful one, located on the slopes of Pichincha volcano, between two deep gorges, shaped by mountain torrents.

The sky there is stark blue, the air is fresh, transparent and cool. This is the reason why this place was given the name Quito which means “a mountain settlement” on the dialect of the ancient Indian tribe Quitus.

Climb of Chimborazo and Cotopaxi.

Day 1. Arrive and accommodation at Quito, the capital city of Ecuador, followed by sightseeing to get an idea of the local culture. Overnight stay at hotel or guest house.
Day 2. Walking tour in Quito for a better acclimatization.
Day 3. Hike to Pichincha volcano (4700 m), the first section of which – from 3117m to 3945 m – is covered by a ride on Teleferico gondola lift (the fourth highest in the world), from the station located right in the city. Pichincha is an active volcano that provides an amazing view of the city. During the volcano’s 1999 eruption Quido was covered by several centimeters of ash. Overnight stay at hotel or guest house.
Day 4. Jeep ride to Chilkabamba refuge at an elevation of 3700 m, one of the most romantic and cute places in Ecuador. The place is equipped with electricity and hot shower.
Day 5. Ascent to the Central Riminahui volcano (4600 m high), with overnight stay in the refuge.
Day 6.  Cotopaxi climb (5897 m) with the start at about midnight or a bit later. By the morning we will make it to the summit of one of the world’s highest lonely standing active volcanoes. Another interesting fact about Cotopaxi is that it is the second nearest to the Earth’s core volcano (the first being Chimborazo). On the same day we will descend to the Jeep and take a ride to the city of Banos with overnight stay at hotel. This city is quite popular among local as well as international tourists despite the fact that Tungurahua’s volcanic activity is high and even urged an evacuation of Banos’ population in 1999/2000. The other popular tourist attractions there are the basilica, waterfalls in the neighbourhood of Banos, the jungle that stretches to Puyo and Micahualli. Tungurahua – also known as “Black Giant” – is the biggest (but not the highest) volcano on the territory of Ecuador. It is easy to climb since Banos is already located on its slope. Periodical well-drilling makes it possible to watch the volcano’s activity and guarantees safety of locals and tourists.
Day 7. Reserve day for climbing Cotopaxi in case we have bad weather on day-6.
Day 8. Getting to Chilkabamba refuge followed by a climb to Karrel refuge (at 4850m) and another one-hour climb to Wimper refuge (at 5050m) followed by rest.
Day 9. Chimborazo climb, with a start as early as at midnight or a bit later. By the morning we will summit Chimborazo, the highest volcano in Ecuador and also the spot from which the distance to the Sun is the shortest, shorter even than from Everest. Since we will get down to the refuge by the noon, on the same day we will descend to our Jeeps and ride to Quito. Overnight stay in hotel.
Day 10. Rest or reserve day for Chimborazo climb, spent in Quito.
Day 11. Flight back home.

The price of climbing volcanoes of Ecuador includes:

The price of climbing volcanoes of Ecuador does not include: