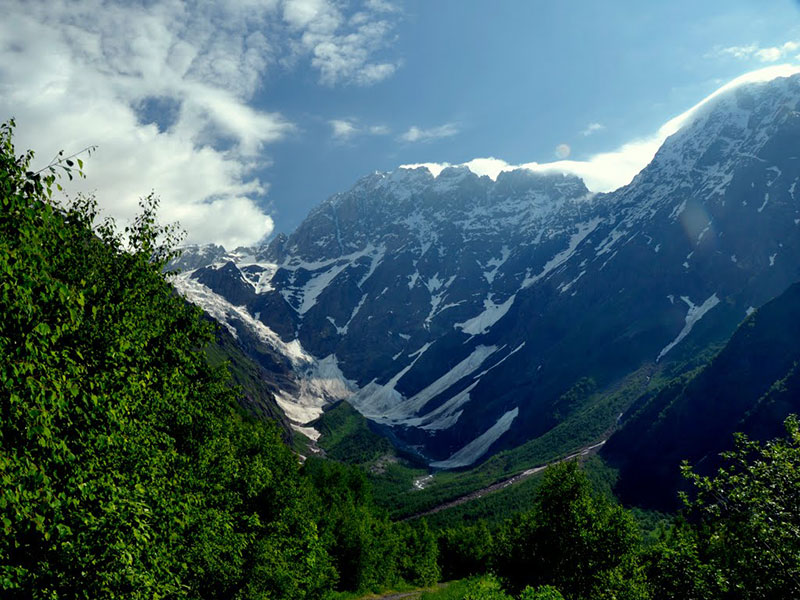 Dykh-tau (5204 m) is the second highest peak in Russia and Europe. It is included in the programs “Second 7 summits”, “Stars of Bezengi”,  “Snow Leopard of Russia”. Mount Dykh-tau is located on the territory of the Kabardino-Balkaria national park next to the famous Bezengi wall – the highest part of the Main Caucasian Range. Bezengi region host six out of eight five thousand meters peaks of the Caucasus. If you want to climb Dykh-tau, you may choose one of more than 10 different routes from 4B to 5B difficulty category (In Russia routes are divided from level-1 to level-6 with A and B sublevels on each level).
We offer climbing to the top by the northern ridge (rock-ice combined route, 4B), first made by the English climber John Kokkin in 1988. It is one of the easiest and nowadays might be the safest route to climb Dykh-Tau. On the other hand, it is really technical, so some rock climbing and rope skills are required for the successful climb. Good acclimatization is a must also, so best to climb Dykh-Tau being already well-acclimatized or to spend some days in the region of Bezengi before the climb.

Day 1. Arrival to Mineralnie Vody airport, four-hour ride (200km) to the Bezengi mountain camp. You can rent all the needed gear in Pyatigorsk, but it’s more convenient to pre-order everything, so that we deliver it straight to the airport and you don’t loose time and don’t risk that you will miss any gear for your Dykh-Tau climb. Overnight in Camp Bezengi.
Day 2. Final gear check, so that we don’t carry anything useless, acclimatization, checking rock-climbing experience and tests of working with rope. Overnight in Camp Bezengi.
Day 3. Hike to Djangi-Kosh. Overnight in camp.
Day 4. Climb to Sella peak. Overnight in camp.
Day 5. Descent to Camp Bezengi, overnight there.
Day 6. Rest day.
Day 7. Trek to “Russian camp”
Day 8. Trek to VCSPS camp.
Day 9. Climb Dykh-Tau
Day 10. Descent to Bezengi camp
Day 11-12. Reserve days.
Day 13. Transfer to Mineralnie Vody for departure home.

Price of the expedition to climb Dykh-Tau includes:

• Guides: a leader guide of the group all through the ascent and assistant guides on the day of summiting (with one guide leading 1-2 climbers). Only one summit attempt is included.
• Hotel stay, shared double or triple room (duration according to the program)
• Transfers by the program
• Obtaining of all required permits and registrations
• Accommodation in huts (by the program)
• Required group gear (such as GPS, ropes, ice screws, tents, kitchen and radios).
• Three meals a day, including dinner on the first day and breakfast on the last day of the trip

Price of the trip to climb Dykh-Tau does not include: