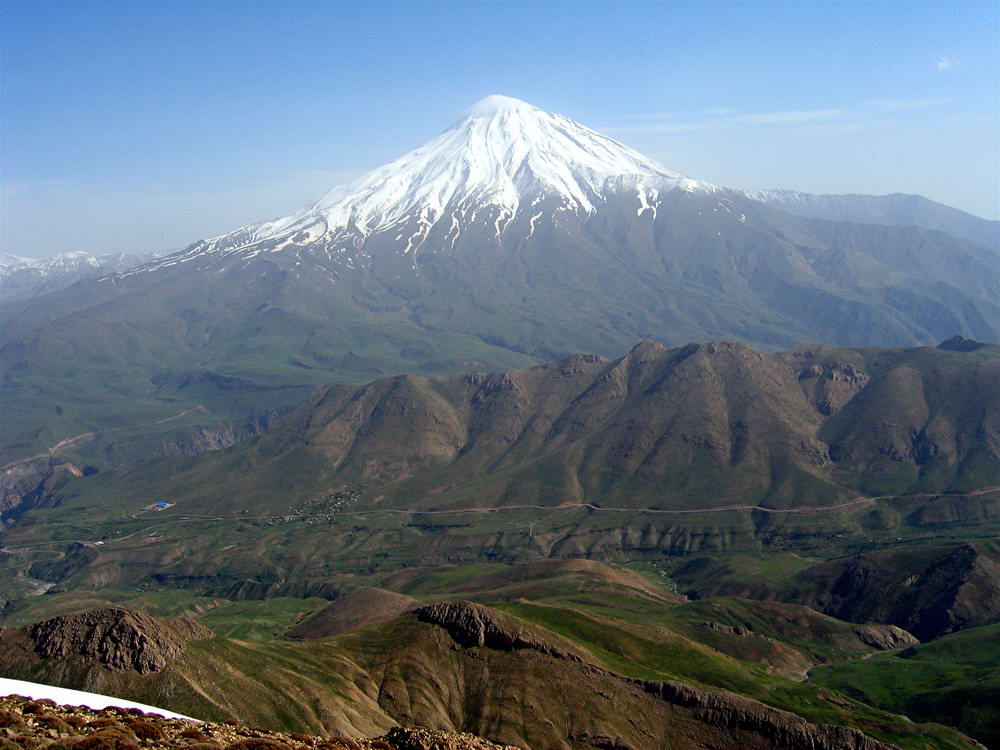 Located only half an hour’s drive from Iran’s capital, Tehran, Mt. Damavand is among the world’s most accessible 5000m altitudes, located in a rich and unique cultural milieu.

This majestic dormant stratovolcano – that looks like a bigger replication of Mt. Fujiyama in Japan – is the second highest in Asia and the highest in the Middle East. Covered by clouds most of the time, the snowy white summit of this mountain is one of the most spectacular views in Iran.

On Mt. Damavand’s lower slopes there are hot springs (with some of them located in the village of Larijan).

The volcano’s summit is featured with a crater of about 150–200 m across, covered by pumice stones and sulfurous rocks. The upper slopes and the crater itself are covered with snow in autumn, winter and spring. Climbers may encounter some difficulties (such as cough, throat irritation, running nose, and allergic reactions) due to the sulfuric gas at the altitude of about 5400m.

Damavand’s height allows for amazing views opening from its top to the valleys and mountains stretching hundreds of kilometers around. Particularly it provides great views of the Alborz Mountain Range, the Caspian Sea plain, as well as the deserts of central Iran.

Day 1.  Meeting at the airport. Transfer to the hotel.
Day 2. This climb to Damavand begins with a day transfer from the hotel in Tehran to Camp 1, to the “Polur hut”, at an altitude of 2270 m. The rest of the day we will acclimatize (without strong physical exertion or climbing), prepare for the next day and check equipment. “Hut Polur” is part of a large mountain sports resort and is a comfortable hostel with bunk beds, a kitchen, hot water and shower.
Day 3. The day begins by moving by car to Camp 2 “Basic hut” (at an altitude of 3040 m), followed by a 4-6 hour ascent at a slow step to a height of 4250 m, to Camp 3 “New Hut” (“Bargakh Sev”). Overnight in a cozy hostel Camp 3.
Day 4. This day of our tour to climb Damavand is devoted to acclimatization ascents to neighboring heights and preparations for the conquest of the summit the next day. Overnight in the “New hut” Camp 3.
Day 5. An early start – at 5 am – and reaching the peak after about 5-7 hours. Return to Camp 3 late in the evening. Overnight at the New Hut Camp 3.
Day 6. Reserve, descent to Camp 2 after an early breakfast and arrive by car back to Camp 1 in the region of 13 or 14 hours. Return transfer to a hotel in Tehran. The end of our climb to Damavand.
Day 7. Departure.

Price of Damavand climbing expedition does not include:

Flashlight diode on the head: