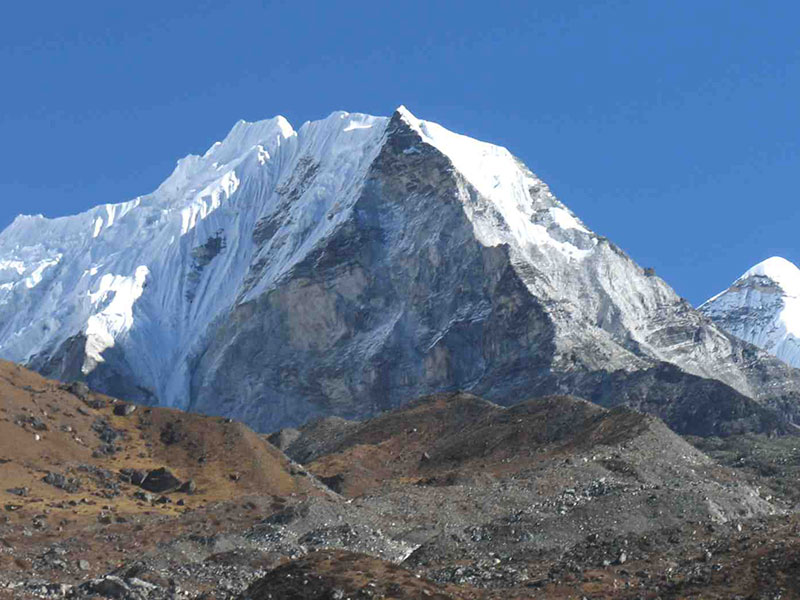 The “normal” route to climb Island Peak is passing through the mountain’s south-eastern slope and its south-western ridge. It begins in the village of Chukhung. After crossing a small stream, we will step on the trail leading to the base of Island Peak. The trail is passing over a moraine ridge, and after reaching a small plain gorge near the river, turns to the left from it. The next section of the route passes through a valley, and then turns to a passage between walls of moraine on the right, which will take us to a dried up lake. Then the trail turns to the right again and passes between Island Peaks’ slopes and walls of moraine. Located there, at an elevation of 5100m is the Base Camp, from which many of climbers begin their ascent. It takes about two to three hours to get there.

A bit further from the Base Camp one can see a distinct path leading to the left, for a pretty steep, an hour-plus long ascent to Attack Camp (at an elevation of 5500m). Please keep in mind that this camp may encounter difficulties with water supply, but usually there is some snow between rocks.

From Attack camp we will start our climb Island peak to the rock coloir. At the beginning, the trail passes by the left side of the coloir, getting close to rocks, then it shift to the right side. There are access towers and platforms for setting up tents throughout this section of the route. Further on we will be finding our way with the help of those towers since the path gets lost in rockslides, reappearing closer to the glacier.

The section of the route passing through the glacier is full of crevasses. Usually this trail is pretty busy, so the path is well-trodden and leads to a steep snowy slope. During the climbing season this slope is usually equipped with guard-ropes consisting or three or four ropes up to the spot where it reaches the beginning of summit ridge. After that, the trail turns to the right, leading up 100m, and passes over a narrow ridge to the very summit. Descent is made by the same route.

Day 1 Arrive in Kathmandu. Hotel accommodation. Rest after the flight.
Day 2 Departure from Kathmandu to Lukla (about 35 minutes of flight, 2840m). Arrival, the beginning of the route – go to the village. Phakting (2.5 hours, 2610 m) or to the village of Monjo (4 hours, 2800 m), depending on the level of training of the group.
Day 3 Go to Namche Bazar (3444 m, 6 hours). Night at the lodge.
Day 4 Day at Namche Bazaar to acclimatize to a height. Walk to the Japanese hotel, whence in good weather overlooking Everest. Night at the lodge.
Day 5 Descent to the river, long ascent to the famous Tengboche High Monastery (4 hours, 3860 m). Night at the lodge.
Day 6 Track to Pheriche (4250m). The trail passes through high hinged bridges, above the “boiling” through the huge white boulders streams.
Day 7 Pheriche – Lobuche (4910m). The rise on the plateau, on which with a small climb we will approach the moraine of the Khumbu glacier.
Day 8 From Lobuche climb to the base camp of Everest (5364m). Return to Gorak Shep (5140m). Night at the lodge.
Day 9 Climb to the top of Kala Patar (5600 m). Descent to Lobuche (4910m), rest. Overnight in Lobuche.
Day 10 Descend to Dingboche and then go to Chukung. Night at the lodge.
Day 11 Moving from Chukung to BC Ireland Peak. Setting up a campground. The transition from Chukung 3-4 hours. Night in tents.
Day 12 Climbing Island Peak (6165 m). About 6-7 hours up and 3-4 hours down. Descent to BL. If possible – descent to Chukung. Overnight in tents/loggias.
Day 13 Descend to Pangboche. Night at the lodge
Day 14 Descent to Namche Bazar. Night at the lodge
Day 15 Transition Namche Bazar – Lukla.
Day 16 Departure Lukla – Kathmandu. Overnight at the hotel in Kathmandu.
Day 17 Breakfast in the hotel. Transfer to the airport. Departure to Moscow.

Not included in the cost of Island peak climb: